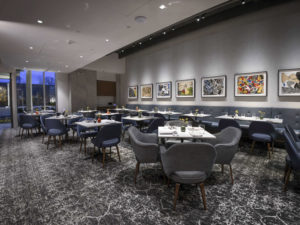 Recently Herb and I went out on a date.  We wanted to try a new, hot restaurant called 1900 so we made a reservation.  Good news?  We got in.  Bad news?  The only thing left open was at 6:00 pm.  Now that might explain what happened next, but it was still shocking, and unwelcome, and altogether uncalled for.

The restaurant tucked discreetly off the street, was beautiful and sophisticated, decorated in austere gray and white with floor to ceiling windows.  The elegant atmosphere was just quiet enough to make it seem extra special. We followed the hostess (who looked like she was twelve) to our table and sat down, grinning because we were so excited to be out together.

We giddily nodded as our waiter delivered water, took drink orders, and recited the specials, so we didn’t immediately notice where we’d been seated.  It was a corner table, one of the best in the room where we had a lovely view of everyone in the place.

It wasn’t the table that bothered us, it was the company!  It looked like we were dining in an upscale nursing home! Everyone in that room was OLD! 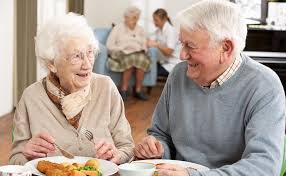 I looked at Herb and asked, “Did we cross over to this status without our knowledge?  What’s with the all the raisins?”

Unconvinced, I looked suspiciously around the room.  This, I thought to myself, seriously sucks.  Then I had a drink.

This morning I woke up with a stiff back.  It’s been stiff for about three weeks, but it went rogue on me this weekend after a particularly shitty week.  Undeterred, I woke up at 5 am, thudded out of bed and stubbornly did my morning meditation.  Mind over matter, you know. 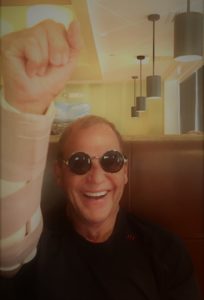 I then packed a bag to drive with Herb to the Mayo clinic for the third and final visit in three weeks.  It was to be a good day- at 2 pm he was scheduled to get his arm out of the straight cast he’s been wearing since having elbow surgery last month.

Living with the one arm bandit has had its challenges and we were both looking forward to his emancipation.

Although my back was killing me I was determined to be a good partner and make the six-hour drive. I packed my Yamuna balls, back support pillow, ibuprofen, ice packs, and favorite healing crystal to help me make the journey.

We made it as far as the county line before he turned the car around and brought me home.  “This isn’t going to work,” he said, ” let’s be logical.  You’re miserable and I can’t worry about you.”

So, I thought, maybe I am old.

Tomorrow I turn 59 and that’s a number an awful lot like 60, which I used to think was old.  In fact, when I was a kid, my friend Duonna House told me her parents were 30, and I thought they were ancient.  I also remember watching middle-aged women put lipstick on in the bathroom at Putsch’s cafeteria, wondering why they even bothered.  Didn’t they know they were old?  Jesus, I was brutal.

Now, when I hear my kids talking about feeling old in their 30’s I want to laugh, but really, why should I?  Age, like time itself, is a construct, so who’s to say who’s “old” and who isn’t? 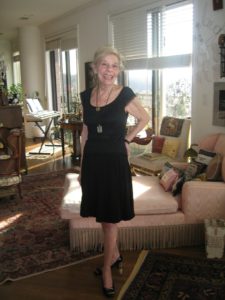 Age never bothered my client Rae Block.  A diminutive force of nature, Rae’s power as a woman only increased as she aged because she only grew more into herself.  She was funny; she was intense, she was smart, and she was irreverent.

I knew the moment I met Rae that I was in the company of a unique woman.  What I didn’t  know at that moment was how lucky I was that our lives had crossed.

One of the first things my new employer said to me was, “I hope you’re better than my last trainer.  All she did was walk me to get ice cream,” and she laughed that ornery laugh. “I knew how to manipulate her.  I hope you are going to be tougher on me than that.”

Classic Rae- being herself was never a problem.

Rae was bold.  She wasn’t about to take an ounce of grief from anyone and you knew it.  She had lived a life of her choosing and she took responsibility for it.  That’s why she abhorred anyone who didn’t do the same.  She did not suffer fools… or victims… or weaklings.  I loved Rae and I never wanted to disappoint her, so I learned to be someone she could respect and that helped me in my own life.

As the months and then years passed, my time with Rae became one of the highlights of my week.  She’d roll her eyes during wall squats, protest about the treadmill speed, feign weakness on the abdominal curls, but she was as lithe and energetic as a 20-year-old (she often looked like a 10-year-old rolling around the floor), and I marveled at her ability to be completely ageless in mind and body.

One day after training, Rae mentioned that she had a spot on her lung and that her son was taking her to the Doctor to have it biopsied.  I went cold inside.

I said, “You’re going to be fine.  You feel great!” and she agreed.  She felt fine; she felt great.  Nonetheless, I asked her if I could call her after she went to the oncologist to see how it went.  I also told her she didn’t have to pick up (Rae valued her privacy), but that I would call anyway.

I was with friends for dinner but snuck away to the ladies room at the appointed time to call her.  I was relieved when she picked up.  I thought this was a good sign. 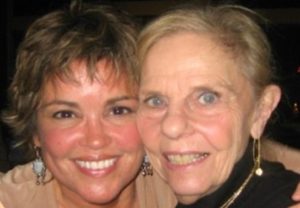 “How did it go at the Doctors today?”

“Yes, well I asked the Doctor about it and it’s spread to several places.”

“Well then I asked what stage it was, and the doctor said 5.  Then I asked her how many stages there were, and she said 5.”  (with humor!)

I said nothing.  I couldn’t because she didn’t want tears from me.

“And so,” she continued,” I asked how long I had to live without chemo and I didn’t like that response… so I guess I’m going to have chemo.  We’ll just see.”

“I know that darling.”

I think she sensed I was going to say something schmaltzy so she interrupted, “But Dr. Holt called today, and I got some good news.”

When I begin to feel sorry for myself because my back hurts, or my hip hurts, or my butt or face is drooping, I think of Rae.

Because Rae never cared about age.  She never seemed like a woman of 75 or 80 or 82.  She was beyond it.  She was simply Rae and that example was only one of the magnificent gifts she gave me.

15 thoughts on “Why I’ve Decided Not To Age”