Three days before she was gone, I walked into her room to find her breathing labored, and her speech incoherent and alien.  My heart sank when she was unable to get the warm cookie I’d brought to her to her mouth- her hand simply would not allow the task.  I took it from her and told her we could eat it the next day, but of course, even then, I knew that wasn’t true.

As I got her laundry ready to take home I said cheerfully, “Mom, you look a little tired today.  I’m going to take your laundry home and I’ll be back first thing in the morning.  You’ll feel better then.”  And then, with sudden order and clarity, she reached for my hand and said, “be careful out there, there’s a lot of traffic.”   Those were the last words  I heard my Mom say, and of course, they could not have been more caring.

The fact that my mother was afraid of traffic, and weather, and insults real and imagined, did nothing to deter her from fighting against it all- she was defiant in her rebellion and took names after kicking butt, not before.   You didn’t apologize for doing the right thing after all, even if the right thing existed mainly in your own mind.

She and I took a long road home and I’m embarrassed to say I lived most of my life in reaction to her.  I resented her for everything we did not have in common.

She weighed 89 lbs soaking wet and I was born so fat she wondered if I had a neck.

She was beautiful and dainty and as feminine as they come-  I was squat and bald for so long as a baby that she taped plastic flowers to my head to make sure folks knew I was a girl.

She was a southern belle who feigned weakness but ruled our home with an iron fist.  The fact that she covered it with a white glove didn’t fool me-  I hated her hypocrisy and made it my mission in life to prove her wrong.

I called her the Little General behind her back and mocked her to her face when I was an adolescent.  I loved my Father and couldn’t understand for the life of me why he would love a woman like her!

When he died in 2008, he wouldn’t let go until we all promised to take care of Mom.  If there was one thing my Dad loved more than anything else in this world, it was his little Dene and he was none too excited about leaving her on this earth without him.  He’d spent 63 years loving, protecting, and providing for her… he couldn’t leave her unless we promised she’d be safe.  And that’s a promise you don’t make unless you can keep it.

My brothers live out of state, and though they were amazing about flying in and out and providing for her financially, the bulk of Mom’s care fell to me.

During that time we moved from her home to assisted living to nursing care to hospice.

We suffered broken shoulders, hips, glaucoma and one death defying visit to a psychiatrist when she became unusually paranoid and delusional.

We survived nursing home bureaucratic mishaps and roommates that were “having sex at all hours of the night” and “cutting the bottoms out” of her pockets to steal from her.  At one point my Mother was assured that I earned my living as a working girl and Herb was my pimp!

You get the picture.  I had to make a choice.  Stop fighting.  Start laughing and grow the fuck up.

I don’t think anyone was more surprised than I was that I loved my Mother so much.  I was completely unprepared for how deeply I wanted to be with her and take care of her and be strong for her.  This was not me. 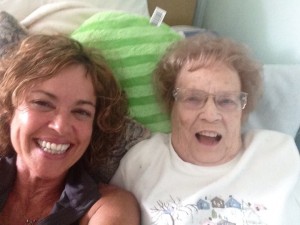 And so, after she began to reclaim her innocence; when her world began to simply be days that looked an awful lot alike; when she wept because of her confusion, I was happy to be there – to learn that I could comfort her and give her peace.

We went to Applebee’s and art class and Sonic and JC Penney.

We went to the movies and the museum and to the park.

We got manicures and pedicures and even a facial!

We watched the fish in the aquarium and walked around Delmar, and I listened in the lounge as she told me all the tawdry gossip of staff and patients.

My Mother had a detailed imagination and once she got started on a yarn, you’d just better settle in and listen.  And so I learned to listen to her without having to be reasonable, and her stories made us both laugh…. and the more I laughed, the more she told them until it didn’t matter anymore- and soon we were two ladies laughing and cackling and being silly.

I wouldn’t trade a moment of the last few years of my Mom’s life because we finally got to have the kind of relationship I’d always wanted.  I knew she loved me and I knew I loved her.

When I was younger acting like a know it all, my Mom used to say to me, “don’t count your chickens before they’re hatched.”    I didn’t get it then- I just thought she was a hayseed from Tennessee, but now I understand.  Life is a miracle that will surprise you every damn day if you let it.  And so, for you Mom, I’ll not count my chickens today.