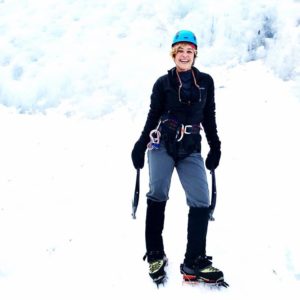 My first trip to Ouray to ice climb was several years ago.  We went to meet our dear friends Chuck and Doris Downey who are avid rock and ice climbers. Each year, between mid-January and mid-February, ice climbers from all over the world congregate in tiny Ouray, Colorado, home to one of the world’s greatest ice climbing parks. Yeah, I know what you’re thinking because I thought it too- who in the world gives a shit about climbing big icicles?  Well, apparently a whole lot of people.

That first trip I was still rather untested in the outdoor world.  Sure, I’d hiked a bit but was more than a little terrified of heights.

I‘d only rocked climbed once and was so scared that my leg bounced uncontrollably as I clung to the rock in fear (this, I later found out is known as “sewing machine leg.”) I hated it, hated being terrified and hated that although I was the youngest in my newfound foursome, I was the least competent of all.  Always the positive cheerleaders, my new friends said I‘d be “a natural on the rock” IF I lost about 10 lbs.  Yep, that’s right.  Not only was I incompetent, I was fat.

Needless to say, that stuck with me, making me a reluctant (and petulant) outdoors person.  Why would any rational person agree to this?  Bundled up in five layers of clothing, wearing Frankenstein boots and spikes, squeezed into a harness prohibiting any chance of peeing, I stood frozen in a gully so deep, dark, and cold it could be Siberia.  My rented boots hurt me so bad I cussed my friends with each lumbering step—- and there were a lot of steps since we also had to hike to the park to find a wall that was open and climbable.  And that was just the beginning of the fun. 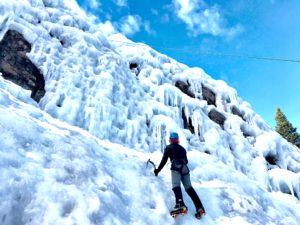 My first climb I clawed and picked my way half way up the wall, shaking, cussing and sweating even though it was 40 below.  I was cold, thirsty and dying to be anywhere but in this crevice, on this wall, heart pounding, ego trampled, miserable in my task.

Reaching a spot which required skill, I tried in vain to get a good pick in the hard ice.  It simply bounced back in my hand with no result, over and over again.  I said to myself, in what I  thought was a whisper, “well, fuck this!”  then heard it echo down the walls for every other climber to hear.  Some thought it was funny,  I did not.  I was lowered down, humiliated, vowing never again put myself in this ridiculous situation.

In the years that followed, I made excuses…my foot hurt, I got a boob job, I was constipated, whatever, just to get out of that damn ice climbing. It got to the point that on our last trip, I just went snowshoeing myself, not even feigning interest. I didn’t want to and I didn’t have to, and that was that.

Last year, because Herb was sick, we didn’t go to Ouray.  In fact, we didn’t get to do a lot of things we’d normally do due to his illness. It took most of the year for us to finally discover what was behind his decline.  A trip to the Mayo Clinic precipitated immediate surgery on 8 vertebrae in his cervical and thoracic spine.  We prayed this would help him reclaim his balance, strength, ability to walk and workout again.  It was a really scary, shitty year.

This January, when we talked about ice climbing, it was Herb that would not climb.  Only 6 months post surgery, climbing was still out of the question.  This did not make him happy but we wanted to see our friends and decided to go anyway.

When making our plans, I announced that I would be climbing this year; not just because Herb could not, but because I could.  After losing so much the year before, I decided there was absolutely no excuse for me not to climb if there was still a chance I could.  I refused to take my strength and health for granted. I had a new attitude…and I actually wanted to climb.

Was I still scared?  Yes.  Was it still cold (not really as it was unseasonably warm in Ouray this year). Was I still self-conscious?  Not a bit. I got over myself and decided the challenge would be FUN and it was!  Was I any better a climber?  Well yes, actually, I was, but I still sucked.

I still hacked my way up the ice, but I became open to the lesson.  I wasn’t “bad,” but simply unpracticed.  This could be learned and I was learning it. 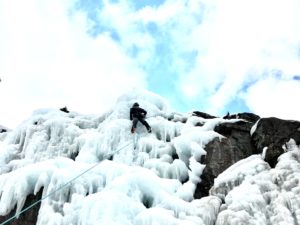 I learned how to look for the best spots to place my tools, use my legs to steady myself and slow down, and balance my center of gravity, strength, and agility to climb better. But the biggest lesson I learned was to let go.

Let go of what other people thought of me up there.

Let go of being afraid and feeling desperate.

Let go of the fear of failing, appearing weak, unskilled and out of my depth.

When I lost my footing and fell, not once, but twice, I let Doris hold me tight so I only fell a few feet.  I learned to trust another person with my safety. And this time when my friends said I did great and praised my willingness, I took it in and laughed at my failures.  My heart still beat hard in my chest and temples, my legs shook, my arms were tired and spent… and I’d never felt more alive!

I let go. I fell, and I was caught. Most of all I climbed and climbed until I got to the top of that damn ice wall and I loved it.  I really did.  All except the part about not being able to pee.  That still sucked.